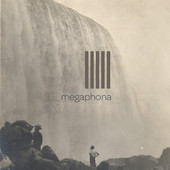 Atlanta’s Quiet Hounds are perfect in their sophomore release, Megaphona.

We’re just one week out from Memorial Day and the official start of summer…so what better way to kick it off than with new music?  Well, grab your surfboards, kids, and get ready to revel in the ethereal waters of Quiet Hounds’ Megaphona. Less than a year after hitting the scene with their self-titled release, the masked quintet from Atlanta is back with another sparkling five songs that will – I promise – once again leave you wanting more.

In keeping with their somewhat mysterious theme, the EP kicks off with a French exchange between an adult and a child, with the younger participant excitedly saying “Quiet Hound!”  It’s just one of several artistic interludes … but after just one spin through Megaphona, you’ll likely be yelling out their name, too.

From the opening undulating waves of “Calling All Gamma Rays” to the tinkling fade out of the instrumental “1864,” the music is a study in lyrical poetry, shimmering harmonies, and truly original melodies.  Toss in rich guitar, keys that range from dancing to experimental, inventive percussion, harmonica, and you’ve got a recipe for an unforgettable sophomore effort.

Every track offers something bright and new for the listener – the band plays with staccato rhythms on “Too Young, Too Wise.” They give us a foot-stomping, hand-clapping sing-along with “I Get Up,” (check out the live take-away video).  They take modern-day twists on new-age on “Gamma Rays” and “Pocket Change.”  The EP’s sleeper hit, “Worn Crush Corduroy,” sends us to a musical summer shoreline hangout with its snappy vocals, Beach Boys-reminiscent harmonies, and tonal guitar. Tying everything together in the perfect package is absolutely dazzling songwriting, starting with “wasted idle hours” and ending with the quest to provide for a family.

It’s a little EP with a huge splash.  I think my friend Elise pinpointed the only negative thing you could possibly say about it – “Megaphona is great but I need more songs!!”  You’d be hard pressed not to want more.  The Quiet Hounds are doing something fresh, and unique – it’s impossible not to get excited about a band that’s doing that in today’s music world.

The official release date for Megaphona is June 4th and the band has a big surprise planned for fans.  Until then, you can stream it on Spotify.

P.S.  If you dig the live take away video for “I Get Up,” you can download the live audio track over on the band’s SoundCloud page.

(I will be eternally grateful to my friend Allison for introducing me to QH – make sure you check out her blog at www.radiopotato.com for all sorts of musical goodness.)

4 thoughts on “Monday Review: Quiet Hounds on the Megaphona”