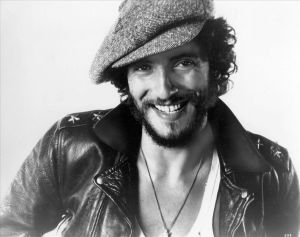 It is officially 20 past midnight on September 23, which means that we are now celebrating a Krissie federal holiday:  Bruce Springsteen’s birthday.

In honor of the Boss’s 64th, a short list of my Top 5 Greatest Springsteen songs.  This is a near impossible task.  The man has put out 17 studio albums, 5 live albums, a bunch of box sets and been on too many compilations to count.  In fact, I would argue that no two diehard Bruce fans have the same list…which is why this post is called My Top 5 Greatest Springsteen songs.

5. “Thunder Road“
Born to Run is not only my favorite Bruce album, but it is also my favorite album, ever, of all time, by any artist. The older I get, the more meaning it has, and loads of it is packed into this song.  The sheer determination, the bravado, the rock n’ roll of it all.  How can you not be on this guy’s side?

4.  “Stolen Car“
The second record of the double-album The River didn’t get much attention, but it sets the stage for Nebraska (which followed on its heels and, as a whole, is probably my second favorite Bruce album of all time).  This track is buried in the middle of that record, and it is an incredibly realistic portrait of a life not only falling apart, but being reduced to invisibility.  It crushes me every damn time.

3. “Born in the USA“
Perhaps the most misunderstood and misused song in the entire Springsteen catalog.  Bruce’s statement on the horrors of how we treated returning Vietnam veterans often gets used as a patriotic anthem…when in fact, it’s anything but.  Oddly, it’s also one of the songs that propelled him to super stardom.

2. “Atlantic City“
Maybe I am fond of this song because it’s about exactly where I’m from, but more likely, it’s because the narrator never fucking gives up, despite his world and his life being a total mess and the outlook for what comes next being downright bleak.  And he’s loyal as hell…he’s never leaving his girl, no matter how bad things get. “Everything dies, baby that’s a fact, but maybe everything that dies someday comes back.”  That guy and I can totally be friends.

1. “Jungleland”
Bruce has a ton of songs that tell epic stories – and I am a SUCKER for a good story.  “Wild Billy’s Circus Story.”  “Rosalita.” “Spirit in the Night.”  “Meeting Across the River.”  They’re all electric in their own way, but none as much as the Magic Rat’s tale of escape, adventure and ultimately, defeat. And Clarence’s sax solo takes the cake.  There is no other song in the world like it, and it is Bruce at his very best.