I have struggled for the last four days about how to write an unbiased “review” of Quiet Hounds latest event, Swans and Embers, held outdoors on perfect Indian summer night on the lawn of an architectural landmark in Atlanta. After reading a few other reviews, I decided I didn’t want to be unbiased because it comes off sounding like arrogant, pompous BS.

So here’s the truth:  I love this band and everything that they are doing. And now that we have that out of the way…

As I’ve come to expect from these artists, the smallest details were covered from the time you set foot on the grounds of the Atlanta History Center, an unusual venue for a show, to be sure, but not at all out of the ordinary for this band. Pathways marked with metal-worked Hounds aflame. Programs for the evening handed out upon entrance. Hand printed posters of the event available. Even a signature drink for the evening (a Drunken Hound!). But it all paled in comparison to the location. 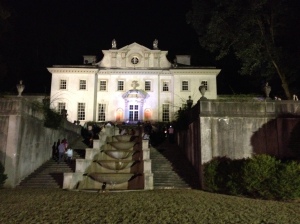 Swan House after dark before the crowd arrived.

Swans and Embers was held at The Swan House, a neo-classical architectural home built in 1928 for the Edward Inman family. It is an impressive structure, but even more impressive are the grounds. Walled off from the city by beautiful gardens, winding paths, and huge trees, one can almost imagine what it was like to stand here before the drone of planes overhead, and the constant hum of an electrified city.

As 8:30 neared, the audience gathered around the front of the Swan House, and the Hounds stealthily dispersed themselves among the crowd. An actor (David Rogers) mounted the stairs, and perched himself on the landing, casually draping himself over the railing and taking on the airs of a Southern gentleman, charming the crowd with witty banter. He was a Guardian of the home, the ghost of Edward Inman we were to believe, there to welcome us. As he spoke, the Hounds called out questions from the audience.” Are you an Angel?” the hound nearest me standing probed the spirit.

Soon, a second figure entered the scene, placing herself much lower on the stairs. Bedecked in a peach gown reminiscent of Gone With the Wind, singer Meghan Arias, who has come to be known as a sister Hound, played the role of a confused spirit of the past, not sure of her location. Listed in the program as “The Phoenix,” the character was lost in time, recalling a fiery past.  The Guardian referenced The Phoenix being from 1864, the year when Atlanta was set ablaze by Union General William Sherman in the Civil War and much of the city destroyed (A second interpretation could have been taken, as well: those who studied up on The Swan House would know that the Inman family had the house built in 1928 after their original house burned down in 1924). “1864,” of course, is also the title of an instrumental piece Quiet Hounds performs (which leads perfectly into their reverential ode to Andersonville, “Beacon Sun”… Although released at different times, the two songs were clearly meant to be listened to in succession).

As The Phoenix continued to ask where – and when – exactly she was, The Guardian answered her, “You are where you’ve always been,” a hat tip to Atlanta – and by extension, Swan House – its resilience, and its sense of Southern tradition, no doubt.  The Phoenix sang a bit of an aria, and although Meghan was not wearing a mic, her voice rang out as the shushed crowd watched this dramatic opening unfold.

By now, the Hounds had mounted the stairs, and answered in rousing chorus as they prepared to take the “stage” for the first act, City in Ashes. With a regalia of snare fir for a military outfit, the fellas jumped into the first of four songs, “If the World,” followed by the Southern Charm bonus track “It’s Alright,” and then two additional newer songs, “Weathervane” and “Like Animals.”

As they wrapped up the first act, horns called the crowd to attention, beckoning us and the band to turn and head down the stone stairways to the second lawn level and the cascading fountains. Once there, the band faced the house (which, in turn, turned the crowd to face the house) and played a short musical interlude. Called “Time Gone” in the program, it felt like an homage to the building and its art, a sort of acknowledgement and thanks to the spirits of the past for the evening’s intrusion into their space. 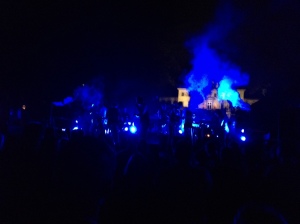 Then, the band turned in lock step and began walking down the sloping terrace to the lower lawn. Fans paraded with them, symbolically moving from past to present day. As the band took their places on a dimly lit stage, the crowd settled in, and Swan House glowed in the background. Then the music took the attention and the band launched into Act 3, dubbed “Reconstruction,” with the high-energy “Night Parade” and followed it up with “Southern Charm.” Then they debuted my favorite new song of the night, the spirited “Good Bones.” The momentum continued to build as The Hounds rolled off several upbeat crowd favorites, and another new song, “Young Clover.”

[ASIDE: I could spend a lot of time talking about the music itself, but if you’ve read this far into this rambling review, you’re in tune with (or interested enough in) what the band is doing and don’t need me to give you a primer.]

All too soon, it was Act 4, “We Burn, We Rise,” and the four songs that remained set a more somber tone, beginning with “Beacon Sun.” The highlight of the evening for me was “Danger Love,” by far my favorite QH song, a bold profession of committing without losing oneself that comes complete with one of the best multi-drum solos you’ll ever hear…I like to refer to it as the heartbeat (two small Instagram-sized snippets below for your enjoyment). Then, the fellas rolled off the last new song of the evening, “Wild Light.”

It was a gorgeous evening. Even though it was about to end, I could not wipe the smile off my face.

Whether or not it was intentional (knowing these guys, most of it was), there were messages to be heard beyond the music. You can’t overlook that the band selected a venue nearly 100 years old, linking themselves to a time when art was respected and deeply valued… playing incredibly poetic and powerful songs against a backdrop of an artistic masterpiece and commanding their audience to recognize this beautiful past. An English major to my core, I also saw deep symbolic meaning in the swan itself, found in stone all over the property. Long a powerful, graceful creature in mythology, swans represent a number of things: eternal love, holy light, and of course, the idea of a glorious final “swan song” and its aching beauty.

These five gentlemen, their like-minded artisan cohorts, and the music they make have come to represent many of these very things to me. They are a rarity in today’s overcrowded, oversaturated, careless rush-to-be first, emulate everyone else music industry. They don’t want or (more importantly) need people to know their names or faces. They’ve bucked every convention for the sake of making great music. And it is truly incredible music, stunningly beautiful, hopeful, and graceful.  They want to call attention to the past, particularly the Southern past, to remind us from whence we come. But more than that, they have slowly and quietly built a community of fans that truly value art. And that is the real power of the Quiet Hounds. They are a beacon of what once was and, I hope, what is to come, in music.

As the night closed out with “Hemlock,” a song I described two years ago when I was first introduced to the band as the soundtrack to someone running through the woods toward an abandoned castle, I looked up to see the night sky ringed by tall trees..and there I was looking toward a well-preserved but abandoned mansion, if not a castle, awash in a lighted Hound insignia.  It was a glorious swan song that brought everything full circle for me. I looked around at the crowd of 500+, individual souls who chose to adventure to a historic site nestled in the heart of Atlanta to spend a night among friends, strangers and Hounds. They were as enamored with the music as I was, and it struck me that we were all linked together in this moment, by the music, the setting, and the magic. An audience among which many know the artists but choose to keep their identities shrouded… a feat in an internet world where nothing is sacred.

We were a community sharing in the secret greatness of the Quiet Hounds.

17 thoughts on “Communing with the Spirits: Quiet Hounds Swans and Embers”